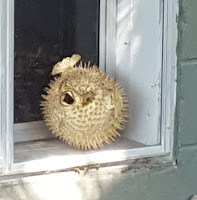 I recently spotted this curiosity in the window of a basement apartment in Saskatoon, looking as if it had escaped from a cabinet somewhere. Varieties of the puffer-fish were popular items for collection in the early modern period. Nehemiah Grew, in his catalogue of the Royal Society’s collection Musaeum Regalis (1681), lists a couple of specimens in this vein. One of them is identified as:


The little GLOB-FISH. Orbis minor. So called from his Orbicular figure. Described in most Musæums. Most curiously figur'd in that of Calceolarius. He is armed with long, round, hard, and sharp Spikes or Needles all round about, almost like those of a Hedg-Hog; and is a sort of Porcupine-Fish. 'Tis probable, That the Fish swims with these Needles all closely couched down round about, for that otherwise they would hinder her swimming. But if at any time she is pursu'd, she immediately advances her Pikes, and bids the enemy come at his peril. (sig. [Pv]-P2)

Grew cites Italian collector Francesco Calzolari (1522-1609) (actually, Benedicto Cerutin and Andrea Chiocco, who compiled the catalogue of his collection) for providing a “curious” figure of this fish. Two specimens are also visible hanging from the roof of his “cabinet.”


It is sometimes difficult to sort out the nomenclature for natural specimens in these collections, owing to naturalists’ and collectors’ habit of naming species by analogy: for example, the “tobaccopipe fish” (with a long, slender body, “from whence its name” says Grew) or the “swallow fish” for a flying fish. The pufferfish, blowfish, globefish, and balloonfish (to name only a few variants) all belong to the “tetraodontidae” family, so named (says Wikipedia) for their four large teeth fused into an upper and lower plate. But in the minds of early modern naturalists and collectors, these fish were associated because they have in common an inflatable body. But while the porcupine fish is closely related and was often, in such collections, conflated with these other expandable, globous fish, it is not actually part of the same family.

Strange fish of all kinds continue to fascinate, in part for all the strange shapes they come in and the comparisons they inspire. They also fascinated then, as now, because they came from a place that is utterly remote to most human experience, a natural black-box yielding a variety of unusual and surprising forms, and then only reluctantly. Watch this space for further explorations of strange fish from the cabinet of curiosities.

A recent special exhibition at the Art Gallery of Ontario featured a re-creation of Guillermo del Toro’s personal collection of memorabilia,...

About the Digital Ark

The Digital Ark is a database of artifacts and natural specimens as represented by surviving records of early modern collections, museum databases, contemporary drawings and engravings, as well as images of extant remnants of these collections. Initially, this database will focus on England and Scotland from 1580-1700, beginning with the collection of Walter Cope and ending with Ralph Thoresby. It will include any collection that aimed at diversity of both natural specimens and artifacts that were valued for being unusual, rare, or exotic. It will therefore exclude collections that were singular in focus (e.g. exclusively numismatic or art collections) but will include, for instance, collections that are chiefly naturalia if they contain at least one other class of object (antiquities for example) and an interest in the strange and exotic. While it will begin with a geographically limited focus, this database will be structured and designed to be interoperable with related materials pertaining to other geographical regions and will make provisions for participation and contribution by the wider community of interested users.

For more information on this project contact Brent Nelson at brent.nelson@usask.ca